- March 26, 2021
Alternative Drummer recently got to ask experimental electronic musician and drummer David Fanhauser, AKA Parallax some questions. He not only answered all of our questions in detail, he also provided us with this amazing gear tour!
Parallax is based in Switzerland and be sure to subscribe to his YouTube Channel here! Check out the full interview below!

AD: What got you interested in experimenting with electronics and drums?

Dave: I‘ve always been a big fan of musicians like Jojo Mayer, Zach Danziger, Mark Guiliana… those guys who dig into genres that are typically not in the realm of „normal“ drumming. It always fascinated me how they push the instrument with the way they approach it. I tried mimicking them in my playing, which was always more fun to me than playing along to, let’s say, „Top 20 Hits Music“. Besides drumming in my free time, I was also intensly listening to electronic music from artists like Aphex Twin, Four Tet, Flying Lotus, and so on… music that typically doesn’t have „real“ studio drums recorded. But that was not important to me. What interested and inspired me was the array of textures that this kind of music has to offer.

The two entities (playing drums / listening to electronic music), though, were always separated. At a later time, I lost a bit of interest in the drums as a whole, started looking what else was out there in terms of instruments, and soon discovered the world of modular synthesis. I was watching loads of YouTube videos (basically by accident), and it became clear to me that I had to get a system. It didn’t take a long time for my modules to pile up, and my setup started to develop. So by falling into the deep, wallet-draining void called eurorack i really got in touch with the syntax of electronic music (literally, because turning knobs in a jungle of patch cables is more fun than scrolling through presets on a computer). Soon, my interest in drumming slowly started to set in again. But I always wanted to somehow link the two sides together. The problem was that i only have two hands, and in my laziness I deemed my vision impossible. It was only after my mind got blown yet again by a different musician, Deantoni Parks. I think he is the prime example of what I call a hybrid drummer, and he proves that your body can indeed serve as a link between two entirely different instruments. Of course, my limbs are nowhere near close the level of independence as are Deantoni’s, but it gave me the push i needed to get rid of that floor tom, replace it with my modular synth and start to play drums with my left hand and the synth with my right hand. Since then, my setup has changed a lot (and still does), and it also is not as strictly conceptualized anymore, but the core idea has always stayed the same: I attempt to encapsulate the sound of electronic music into a new framework whose essence lies in improvisation, real-time sound manipulation, and live-drumming. I call this process „Parallax“.

On a funnier sidenote, this „one-man-band“ setup was also just a necessary result of the lack of fellow musicians in my area who share my vision of music making.

AD: Would you mind providing a rundown of your current setup as detailed as possible, including software and hardware?

AD: What is your experience as a drummer?

I started drumming at a relatively late age (about 11 or 12 years old), and my drumming journey has always been on a hobbyist’s level. Concerning the word „experience“, I guess i can break it into two factors that shaped me as a drummer (and person)

My drum teacher had an annual event where we, the students, could get on a stage and perform a song of our choice with his tour band, which i think is awesome. I remember playing Baby Love by Mother’s Finest live in front of an audience for the first time, with my heart nearly exploding out of my chest. His lessons were always very groove- and fun-oriented, so this definitely helped me stay on track. Later on i started to get involved with different projects of my dad, who creates music for a living. I played drums on some of his albums, but our collaborations mostly resolved around live-performing with choirs. This collaboration is still going on today. Aside from that, I was always looking for bands to play in, but usually there were discrepancies in what i was hoping to find in the music itself and the people playing said music. Admittedly, I was a bit stubborn and narrow-minded during that time. Regarding genres for instance, i would have never agreed to a classic-rock gig back then, which is kinda dumb. Now, I’m more open. I eventually ended up in a „contemporary-christian-music“-band for a year, but my love for drumming started spiraling down during that time. I had to quit that gig for good. Other than that, I’ve never aspired to play Madison Square Garden with Beyoncé or anything like that, but with the small resumé that i can present, the tendency is clearly more on live performing than session recording.

2. Experience with drumming as a form of refuge from the outside world

This is an entirely different aspect, but in my opinion one that involves a whole new type of experience - i.e. an introspective one. For me, spending time drumming has always been super intense and insightful. There were times in which I would play the most simplistic three-note pattern like K/R/L for two hours straight, only allowing myself to change the tempo, voicing, subdivision and so on… just to force myself to be creative with those „gears“. If you do something like that for hours, you eventually fall into a trance-like state, where something like a „quintessential particle“ of your Self presents itself to you. I know that sounds pretentious and new-agey, but in a nutshell, it’s just a form of meditation. Spending time in such a state is highly addictive, and for me this has always been a way to shut down the noisy and hectic outside world for a bit.

AD: What are your future e-drum / hybrid drum plans?

Setup-wise, I don’t have any specific plans. My setup is always changing, and it also depends on what I’m working on at the moment.

Project-wise though, I’d like to combine my „modus operandi“ of music making with other forms of art, for instance visual or other performance art. I feel like that is the way to go, since the whole „band situation thing“ has never really been fruitful. At the moment there’s something in progress with a friend of mine who is a dancer. Currently we’re working with prerecorded material, but my preferred next move would be an actual live and improvised performance of us in the same room, communicating with each other through our way of expression. Art is communication after all. Hers is through dancing, mine is through „parallaxing“.

Popular posts from this blog

How did Jay Weinberg (of Slipknot) make the drum sounds on his Youth Code drum cover? 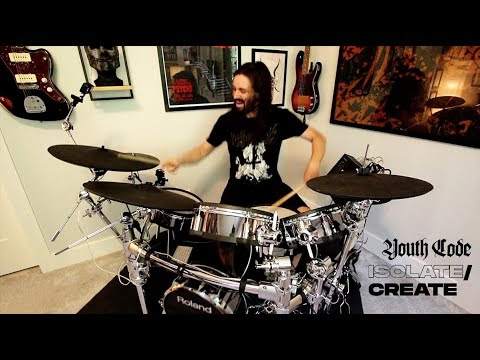 If you've seen Jay Weinberg of Slipknot's awesome drum cover of Youth Code's track Puzzle, you might be wondering what patch he was using on the Roland TD-50 to get that awesome drum sound. That's exactly what I did when I heard it. I thought to myself, hmmm, I have a TD-27, does it have those samples? Turns out this isn't a TD-50 patch at all, and you could get this same exact drum sounds using not only a TD-27, but even with a $379 Alesis Nitro kit, rather than a $5000 Roland TD-50 (though I'm sure the feel of the Roland would be much more realistic).  Check out the video then read below for the details on how to get the sounds! The way Weinberg achieved this sound was though a drum sample library by Kurt Ballou called 'Room Sound'.  The way that this works is you purchase the sample library through the website above ($89), then load it into Kontakt 6. Kontakt 6 is a sampler plugin that runs on Mac and Windows, and they also offer a free version call
Read more

How I live streamed a full show with multi-cam, e-drums, Ableton Live, and EZDrummer2! 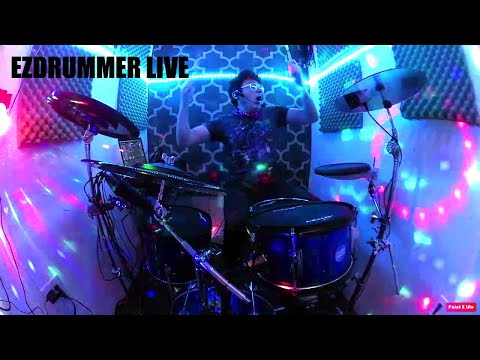