Several years ago, I made some VST software synthesizers for Windows called the Mothman Series. The Mothman 1000 was the first one. It combined subtractive synthesis with FM synthesis and an oscilloscope to make some really unique sounds. Shortly after that I released the Mothman 1966 and then the Mothman Z3000 which is a Casio CZ-3000 emulator (BTW, I made my CZ emulator years before it became trendy) hehe. Now everyone seems to be making one. The Mothman 1966 is a really unique simple subtractive synth with custom waveforms. Later I reworked the original Mothman 1000 and added some improvements and called it the Mothman 2000 (my personal favorite of the 4).

Anyway, the original download links went down and many people have been asking me for them. I’ve been meaning to put them up somewhere, but wanted to wait until I got a real site up and running again. I have that now, so here is the entire mothman plugin set to download for FREE!! They’ll run on Windows or Linux (with wine). DOWNLOAD HERE AND UNRAR TO YOUR VST DIRECTORY! password if needed = themothmanreturns 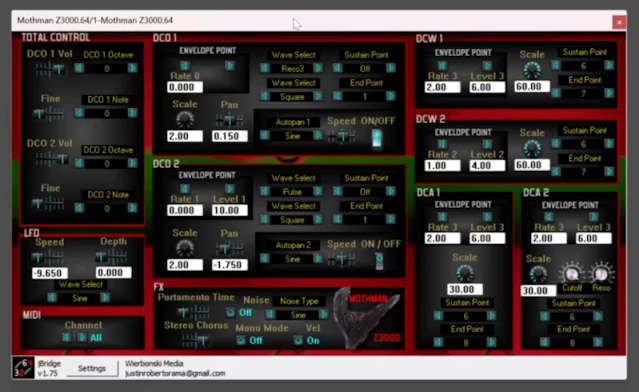 Need a sweet MIDI controller for these synths? Check this one out!

I turned off my adblocker and saw how awful this site looked with all the ads, so I decided it's just not worth it. I disabled all ads!